Settlement at Chorleywood dates back to the Paleolithic era when the plentiful flint supply led to the swift development of tools by man. The Romans built a village on the ancient site complete with a mill and brewery.

The name has been derived from the Anglo-Saxon leah, meaning a clearing or a wood, of the ceorla or peasants.

Chorleywood is most famous for its Quakers. Non-conformists flocked to Chorleywood, promised sanctuary by the locals. William Penn founded the Pennsylvania Colony with settlers from Chorleywood, Rickmansworth, and nearby towns in southern Buckinghamshire, having lived and married in Chorleywood.

Chorleywood Common is undoubtedly the jewel in the crown of Chorleywood. Covering 80 hectares it comprises acid, neutral, and chalk grassland, wooded areas, and seven ponds. The Common is a County Heritage Site, a Conservation Area, and a Local Nature Reserve rich in fauna and flora, fungi, birds and wildlife. Rabbits, squirrels, foxes, badgers, muntjac deer, voles, wood mice, and slowworms can be found on the Common.The common is also home to some beautiful carved sculptures and in particular the Memorial Tree is a special place.

Chorleywood House, a Regency mansion, was built in 1822 by John Barnes, replacing an earlier house. John Saunders Gilliat, the Governor of the Bank of England in 1883–1885, lived in it. In 1892, the house was bought by Lady Ela Russell, a relative of the Duke of Bedford. She modified and enlarged the house, keeping some of the original features including the great fireplace in the hall. She developed the estate to be virtually self-sufficient, with her own farms and market garden, now the site of the tennis club courts. She created formal gardens and parkland near the house and built cottages for her chauffeur and gardener behind the house. She installed electricity using her own generator housed in a building near the summerhouse. Water was pumped from the Chess by a waterwheel to a well (again, near the summerhouse) which was also supplied by a spring. She built a chapel and a drill hall which was used by her Rifle Club. These buildings are still in use and have recently been restored by Three Rivers.

After she died the house went to her sister, Lady Romola, who lived there for six months and then sold it to three local businessmen, George and Jesse Darvell and James Batty. There were plans to make it into a golf club, using the mansion as the clubhouse, but this was during the depression of the 1930s, and nothing came of the proposal. In June 1940, the mansion and land were bought by the Chorleywood Urban District Council together with Hertfordshire County Council and London County Council and designated a public open space. 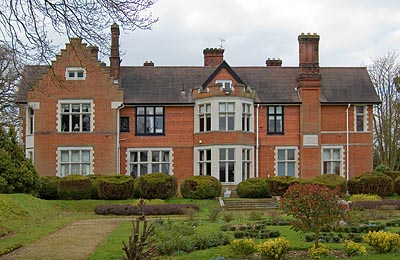 During the war, the mansion housed evacuees from London, under the care of a matron. Army troops and German prisoners of war were housed in Nissen huts on the grounds. Later, Chorleywood UDC adopted the house for their offices, and the Public Library was housed there. Tenants lived in flats in the upper storeys – one remarked that these were the best council flats in the country.

When Chorleywood UDC devolved to became Three Rivers DC with new buildings in Rickmansworth, the mansion was sold and converted into apartments which are now privately owned as is the garden at the rear enclosed by a hedge. The grounds remain as open spaces for the use of the people of Chorleywood, Hertfordshire, and London. In front of the main entrance to the house is a circular pond. This was not only ornamental but was there to provide water in case of fire. Over the years it cracked and became a sludgy mess, so in 2011, the Friends volunteers – with more than a little help from the Parish and the house residents – emptied the pond, repaired the lining, re-filled, and re-stocked the pool.

In the early 1960s, researchers at the British Baking Industries Research Association in Chorleywood improved upon an earlier American bread-making process. This resulted in the Chorleywood bread process which is now used in over 80% of commercial bread production throughout the UK.

Whilst the restoration on Dell Pond was going on a local dog walker had the idea to not cut the trees down completely but to leave 3 or 4 metres of the trunk, these could be the base for a sculpture. He got in touch with Will Lee and Dave Flemon, two local chainsaw artists, and very generously commissioned them to produce some appropriate carvings.

The carvings took two weeks to complete, and the results are absolutely beautiful. There are owls carved into the standing trunks, bears peeping out from trees, a magnificent dragonfly, a fairy castle, squirrels, the old man of the woods, butterflies and a wide seat watched over by a vixen and her cub. And the pond is sealed, fills up with water after a rainfall, and the transplanted iris look healthy.

The Wisteria Circle is located near to the high wall surrounding the Chorleywood Lawn Tennis Club at the foot of what once was the main lawn of the house. The circle has a framework of iron supports, a feature favoured by Victorian horticulturalists. (You can see a larger and more magnificent circle at Kew Gardens). Some of these supports remain, with the sturdy trunks of the original plants now forming a ring, the branches interwoven.

The plants are being pruned and trained with replacements added to achieve once again be the sweet-smelling natural gazebo that Lady Ela Russell and her gardeners once envisaged and developed.

The red and white Summer House standing alone between the house and the public tennis courts is an example of Boulton and Paul’s work – they were noted designers of parkland buildings. It was described in their catalogue as a Japanese tea house, and Lady Ela would use it for tea parties, scrolling up a large blind to allow the view across the parkland. During the war, the Chorleywood WVS used it when ladies would sort rivets as part of the war effort. Later it was used as a nursery school, and then it fell into disuse. It has now been renovated and re-wired and makes a delightful meeting room.

Our routes from Chorleywood are wonderful and varied, from simply exploring the common, discovering the wonders of the Fairy Dell or delighting in the Chess Valleys views.

Why not join us this week?

MELLOW MONDAY AT 10AM

Tracy is a NWUK qualified instructor and owner of Nordic Walking Watford. She leads several walks per week, we well as delivering taster sessions and technique courses. Tracy has completed several long distance endurance walking events including Race to the Stones, Race to the King and the Yorks